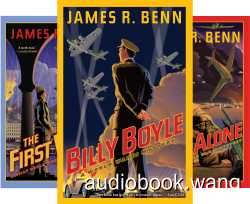 Updated to m4b and to include book 12 Seeding information:

*If you repost ~ a basic “thanks original uploader” is always a nice Upbeat touch. [01]

Publisher’s Summary What’s a 22-year-old Irish American cop who’s never been out of Massachusetts before doing at Beardsley Hall, an English country house, having lunch with King Haakon of Norway? Billy Boyle himself wonders.

Back home in Southie, he’d barely made detective when the war was declared. Unwilling to fight and perhaps die for England, he was relieved when his mother wangled a job for him on the staff of a general married to her distant cousin. But the general turns out to be Dwight D. Eisenhower, whose headquarters are in London, which is undergoing the Blitz. And Uncle Ike wants Billy to be his personal investigator.

Billy is dispatched to the seat of the Norwegian government in exile. Operation Jupiter, the impending invasion of Norway, is being planned, but it is feared that there is a German spy amongst the Norwegians. Billy doubts his own abilities, with good reason. A theft and two murders test his investigative powers, but Billy proves to be a better detective than he or anyone else expected. ©2006 James R. Benn (P)2009 Audible, Inc.

Publisher’s Summary Billy’s task is to help arrange the surrender of the Vichy French forces in Algeria. But dissension among the regular army, the militia, and DeGaulle’s Free French allow black marketeers in league with the enemy to divert medical supplies to the Casbah, leading to multiple murders. Billy must find the killers while trying to rescue the girl he loves - a British spy. ©2008 James R. Benn (P)2010 Audible, Inc.

Publisher’s Summary Billy Boyle awakens in a field hospital in Sicily with amnesia. In his pocket is a yellow silk handkerchief embroidered with the initial L. Gradually he remembers: he has been sent ashore in advance of the troops with this token from Lucky Luciano to contact the head of the Sicilian Mafia. But he must also thwart a murderous band of counterfeiters of Army scrip led by Vito Genovese. ©2008 James R. Benn (P)2009 Audible, Inc.

Publisher’s Summary Fifty BARs (Browning automatic rifles) have been stolen from a U.S. army base in Northern Ireland. His uncle Ike Eisenhower sends Billy to recover the weapons, which might be used in a German-sponsored IRA uprising. Bodies begin to accumulate as Billy finds unexpected challenges to his Boston-Irish upbringing and IRA sympathies. There are rogues on both sides, he learns. ©2009 James R. Benn (P)2009 Audible, Inc.

Publisher’s Summary Billy is sent to London in the midst of a Luftwaffe bombing offensive to investigate the murder of a Soviet official. There’s reason to believe that the crime could be connected to the recent discovery of mass graves in the Katyn Forest, where thousands of Polish officers were executed. Is a killer is out there, targeting Soviet officials in revenge for the Katyn Massacre? If so, the diplomatic stakes couldn’t be higher as the uneasy relationship between the Soviets and the other allied powers hangs in the balance.

Further complicating matters, Scotland Yard names Billy’s friend Kaz, now working for the Polish government in exile, as the prime suspect. Billy must track the killer through London’s criminal underworld and save his friend.

Publisher’s Summary Two officers from the American troops stationed in Caserta, Italy, not far from Naples, have been found murdered. The MOs are completely different, and it seems like the officers had no connection to each other, but one frightening fact links the murders: each body was discovered with a single playing card: the Lieutenant, the 10 of hearts; the Captain, the jack of hearts. The message seems to be clear: If the murderer isn’t apprehended, the higher ranks will be next.

Billy is sent to Italy for the investigation, which grows increasingly sinister. But he has other things on his mind, too. His girlfriend, Diana, is on a very dangerous spy mission, and Billy doesn’t know when - or if - he’ll see her again. To make matters worse, Billy’s just learned that his baby brother, Danny, is being sent over to Europe as an infantry replacement, an incredibly dangerous assignment. And all around him, he sees GIs suffering from combat fatigue preparing for another battle. As the invasion at Anzio begins, Billy needs to keep a cool head amidst fear and terror as the killer calculates his next moves. ©2011 James R. Benn (P)2011 AudioGO

Publisher’s Summary Lieutenant Billy Boyle could have used a rest after his last case. But when his girlfriend, Diana Seaton, a British spy, goes missing in the Vatican, where she was working undercover, he insists on being assigned to a murder investigation there so he can try to help her. ©2012 James R. Benn (P)2012 AudioGO

Publisher’s Summary March 1944: US Army Lieutenant Billy Boyle, back in England after a dangerous mission in Italy, is due for a little R&R, and also a promotion. But the now-Captain Boyle doesn’t get to kick back and enjoy his leisure time because two upsetting cases fall into his lap at once.

The first is a personal request from an estranged friend: Sergeant Eugene “Tree” Jackson, who grew up with Billy in Boston, is part of the 617th Tank Destroyers, the all-African American battalion poised to make history by being the US Army’s first combatant African American company. But making history isn’t easy, and the 617 faces racism at every turn. One of Tree’s men, a gunner named Angry Smith, has been arrested for a crime he almost certainly didn’t commit and faces the gallows if the real killer isn’t found. The tree knows US top brass won’t care about justice in this instance, and asks Billy if he’ll look into it.

But Billy can’t use any of his leave to investigate, because British intelligence agent Major Cosgrove puts him on a bizarre and delicate case. A British accountant has been murdered in an English village, and he may or may not have had some connection with the US Army - Billy doesn’t know, because Cosgrove won’t tell him. Billy is supposed to go into the village and investigate the murder, but everything seems fishy - he’s not allowed to interrogate certain key witnesses, and his friends and helpers keep being whisked away. Billy is confused about whether Cosgrove even wants him to solve the murder, and why.

The good news is the mysterious murder gives Billy an excuse to spend time in and around the village where Tree and his unit are stationed. If he’s lucky, maybe he can get to the bottom of both mysteries - and save more than one innocent life. ©2013 James R. Benn (P)2013 Blackstone Audio

Publisher’s Summary When an unidentified corpse washes ashore at Slapton Sandson England’s southern coast, US army captain Billy Boyle and his partner, Lieutenant Piotr “Kaz” Kazimierz, are assigned to investigate. The Devonshire beach is the home to Operation Tiger, the top-secret rehearsal for the approaching D-day invasion of Normandy, and the area is restricted; no one seems to know where the corpse could have come from. Luckily, Billy and Kaz have a comfortable place to lay their heads at the end of the day: Kaz’s old school chum David lives close by and has agreed to host the two men during their investigation. Glad for a distraction from his duties, Billy settles into life at the family’s manor, Ashcroft, and makes it his mission to get to know its intriguing cast of characters.

Just when Billy and Kaz begin to wrap up their case, they find themselves with not one soggy corpse on their hands but hundreds following a terrible tragedy during the D-day rehearsal. To complicate things, life at Ashcroft has been getting tense: secret agendas, buried histories, and family grudges abound. Then one of the men meets a sudden demise. Was it a heart attack - or something more sinister? ©2014 James R. Benn (P)2014 Blackstone Audio, Inc.

Publisher’s Summary The 10th book in James R. Benn’s Billy Boyle WWII mystery series, normally set against a backdrop of WWII Europe, moves us to a flashback in the Pacific.

It’s 1943: Amid the bitter, violent Solomon Islands campaign, Billy is assigned the murder investigation of a native coastwatcher whom future president Jack Kennedy discovered on a nearby island with his head bashed in. As the body count climbs, Billy must figure out whether Jack is a cold-blooded killer, even as war rages around him.

It’s late May 1944. Captain Billy Boyle is court-martialed on spurious charges of black-market dealings. Stripped of his officer’s rank, reduced to private, and sentenced to three months’ hard labor, Boyle is given an opportunity: He can avoid his punishment if he goes behind enemy lines to rescue a high-value Allied soldier.

A secret chamber and tunnels once used by escaping Huguenots in the 17th century have since been taken over by the Allies. But this “safe house” on the outskirts of Chaumont turns out to be anything but. Two downed airmen, one Canadian and the other American, have been murdered. Billy is flown in as part of a three-man team on June 5, 1944, the night before the Normandy invasion. Billy must solve the mystery of who is behind the murders, then lead a group escape from France back to England, with both the Germans and a killer hot on their heels. ©2016 James R. Benn (P)2016 Recorded Books

Publisher’s Summary A murder in wartime Switzerland reveals Swiss complicity with the Nazis and profiteering during World War II.

Billy and Kaz are sent to neutral Switzerland to investigate the murder of a Swiss banking official with ties to the Office of Strategic Services (OSS). The US and Swiss governments are about to embark on diplomatic discussions regarding the Safehaven Protocols, which are aimed at limiting the amount of war materials exported by Switzerland to the Nazis, halting the laundering of looted gold, and preventing the postwar use of Nazi wealth for war criminals. With the talks about to begin, the OSS wants their involvement in the murder cleared up, as well as to protect the participants from any threat of violence. The plans go wrong from the beginning when Billy and Kaz crash-land in France. As they make their way through occupied territory to the border, they meet Anton Lasho, a member of the Sinti ethnic group, whose family was slaughtered by the Nazis, and who is, in turn, a one-man Nazi-killing machine. They’ll need his help, because as they find once they make it across the border, Swiss banks are openly laundering gold “harvested” from concentration camps, and those that are profiting will do everything they can to protect their wealth and hide their dark secrets. ©2017 James R. Benn (P)2017 Recorded Books