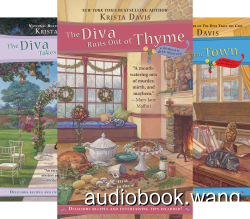 UPdated to include Book 11 and m4b

*If you repost ~ a basic “thanks original uploader” is always a nice Upbeat touch.

Publisher’s Summary Few can compete with the Natasha Smith when it comes to entertaining, but her childhood rival, Sophie Winston, certainly tries. While Natasha is known for her intricate centerpieces and painstakingly prepared gourmet meals, Sophie likes to keep things simple…real simple.

Natasha may have stolen the spotlight - and Sophie’s husband - but Sophie is determined to take home the prize at the Stupendous Stuffing Shakedown. She just needs the right ingredients… However, Sophie’s search for the perfect turkey takes a basting when she stumbles across a corpse. And when the police find her name and photo inside the victim’s car, they think she has some explaining to do. Sophie will have to set her trussing aside to solve the murder - or she’ll be serving up prison grub - and that definitely wouldn’t be a good thing. ©2008 Christina Ryplansky (P)2013 Tantor

Publisher’s Summary Sophie Winston’s sister, Hannah, is getting married - again! And if you ask Sophie, her future brother-in-law is no prince. But is he a killer? That’s the question on everyone’s mind when his ex-wife is found hanging from a pergola. This is one event Sophie and her sister hadn’t planned on.

As hidden family secrets begin to come to light, Sophie finds the list of suspects is almost as long as the list of wedding guests. Will the real killer be seated on the groom’s side or the bride’s? Or will he be standing at the altar? Either way Sophie must solve the murder in time to stop her sister from making the biggest - and possibly the last - mistake of her life. ©2009 Cristina Ryplansky (P)2015 Tantor

Publisher’s Summary When Sophie Winston’s neighbor - a reclusive professor - dies, his final wish is for the Domestic Diva to throw a dinner party in his honor, and he’s planned everything down to the letter.

But what no one planned for is the corpse of a student that Sophie finds in his house…or the mysterious will that shows up asking the question: Did the professor cover up a huge crime? ©2010 Cristina Ryplansky (P)2015 Tantor

Publisher’s Summary A Scrooge steals presents right from under Sophie Winston’s family Christmas tree. Then her sister-in-law’s father shows up with a diva girlfriend just a month after his separation. More than one person is thinking of committing a merry murder - until it actually happens. With many under suspicion for the deadly deed, can Sophie find the murderer and restore the Christmas spirit before it’s too late? ©2010 Cristina Ryplansky (P)2015 Tantor

Publisher’s Summary Domestic diva Sophie Winston is getting into the Halloween spirit; her decorations for a community haunted house are so good, it’s scary. Not to be outdone, rival domestic diva Natasha is throwing a spooktacular Halloween party at her house. But when Sophie arrives, she discovers one of Natasha’s guests dead in a Halloween display and a pale, fanged partygoer fleeing the scene. Could the killer be a real vampire - the same one rumored to have lived in Sophie’s haunted house back when it was a boardinghouse? Good thing a domestic diva never runs out of garlic. ©2011 Cristina Ryplansky (P)2016 Tantor

Publisher’s Summary Determined not to be a garden-variety diva, Sophie Winston’s neighbor Natasha cultivates a plan to shine on television - using Sophie’s backyard. As the cast and crew of the makeover show Tear It Up with Troy bulldoze through her backyard - and vacation - Sophie retreats to her perennial boyfriend Wolf’s to replace a dead rose bush. But her tender deed goes awry when she digs up a purse belonging to Wolf’s missing wife.

As speculations sprout, Wolf bolts, and then a body crops up in a garden. Is Wolf’s thorny past raising a dead head? This is one case the domestic diva can’t let wither on the vine. ©2012 Cristina Ryplansky (P)2016 Tantor

Publisher’s Summary Sophie Winston and her BFF, Nina Reid Norwood, share a sweet spot for animals. So Sophie is delighted to help when Nina cooks up Cupcakes and Pupcakes, a fundraising event for animal shelters. All the local bakeries will be selling treats, with the profits going to pups and kitties in need. But Old Town is in for a whole batch of trouble when a cupcake war erupts between two bakeries….

Tongues wag and tempers rise when a partner leaves Sugar Baby Bakery and unveils her competing cupcakery, Sugar Mama, precisely as the fundraiser gets under way. Just as it seems nothing else can go wrong, Sugar Baby’s sole remaining employee is found dead. Suspicion falls on the feuding owners, but the scrumptious new guy in town is also raising some eyebrows. Now Sophie and Nina have to sift through the clues and discover who isn’t as sweet as they seem. ©2013 Cristina Ryplansky (P)2016 Tantor

Publisher’s Summary The holidays are domestic diva Sophie Winston’s favorite time of year. But this season, there seem to be more mishaps than mistletoe. First, Horace Scroggins tumbles from a balcony during his office Christmas party. Then, Sophie’s neighbor takes a fall from his ladder while decorating his roof with lights. But it’s the cookie swap that really starts to make her wonder who’s naughty or nice.

Sophie arrives at the annual event with high spirits and 13 dozen chocolate-drizzled gingersnaps. But when an argument erupts and a murder ensues, it becomes clear that the recent string of events is anything but accidental. Now Sophie has to make a list of suspects - and check it twice. ©2014 Cristina Ryplansky (P)2016 Tantor

Publisher’s Summary Domestic diva Sophie Winston is in charge of the sweetest event in Old Town this summer. Amore Chocolates is celebrating its 50th anniversary with a chocolate tasting at the mansion of the company’s CEO, Joe Merano, and Sophie is running the show. With cookies, candy, and five kinds of chocolate cake, it’s a chocolate lover’s dream! But when Joe goes missing, the celebration becomes bittersweet. And when Sophie discovers the body of a competing chocolatier in the guesthouse, the event turns downright deadly.

As if that wasn’t enough, Sophie’s been receiving daily boxes of sweet treats. After ruling out her new beau and her exes, Sophie wonders if someone’s trying to send her a message - and if she’s next on a chocoholic’s hit list. ©2015 Cristina Ryplansky (P)2016 Tantor

Publisher’s Summary When The Parlour opens up in town, domestic diva Sophie Winston finally has a place to satisfy her cravings for all things tea and crumpet related. And the shop serves as the perfect place for the ladies of the town to gather and gossip, especially since it’s conveniently located right across the street from the new antique store run by the handsome and charming Robert Johnson.

But speculation around Robert really boils over when he’s found dead - a victim of poisoning after attending a literacy fundraiser at The Parlour the night before. What Sophie learns about the man leaves a bitter taste in her mouth, and she’ll have to strain out a killer from a strange brew of suspects. ©2016 Cristina Ryplansky (P)2016 Tantor

Publisher’s Summary Domestic diva Sophie Winston can whip up an elaborate event in her sleep, but as the hippest hostess, she rarely gets to enjoy the full guest treatment. Which is why her best friend Nina Reid Norwood loops her in to the latest culinary craze: a pop-up gourmet dinner party. The celebrity chef, the epicurean menu, and the high-profile attendees are all a surprise, turning the decadent dining experience into the hottest ticket in Old Town. But Sophie’s just pleased as punch that she finally has an opportunity to join her fellow foodies in some fun.

The posh party proves to be a recipe for disaster when Hollis Haberman sours spirits by bringing his own hot new dish - his young trophy wife. With Hollis’s son and ex-wife in attendance, there may be more heat at the table than in the kitchen. But by aperitifs, Sophie discovers Hollis swallowing his last bits of air, and she must scramble to stop a killer before the swanky supper becomes anyone else’s last meal. ©2018 Krista Davis (P)2018 Tantor